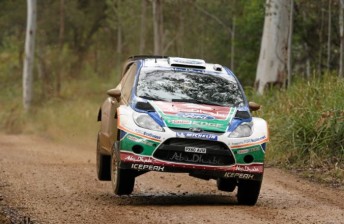 Latvala sits 22.6s in front heading into tonight’s Castrol EDGE Super Special Stages in Coffs Harbour, but is expected to allow his team-mate to win the rally tomorrow in order to strengthen Hirvonen’s title chances.

Hirvonen was disadvantaged by running as the first car on the road today, but remains a healthy 37.4s buffer over of third-placed Petter Solberg in the overall standings.

Citroen drivers Sebastien Ogier and Sebastien Loeb dominated the afternoon’s stages, with the younger Frenchman fastest on Stages 15, 16 and 17 before being edged by just 0.2s by the reigning World Champion on the day’s final forest test.

With Henning Solberg retiring from the leg after his Ford stopped on Stage 15, Stobart-backed driver Matthew Wilson has inherited fourth overall – some 5:47.6s behind the leader.

There was disaster for leading Australian hope Brendan Reeves, whose car failed to start Stage 16 (CLICK HERE for separate story).