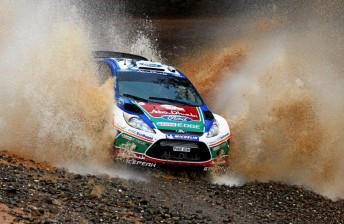 Jari-Matti Latvala has dominated the second morning of Rally Australia winning all four stages to grab the lead from his Ford team-mate Mikko Hirvonen.

Latvala started the day seven seconds behind his countryman, but by the lunchtime service he had turned that into a 17.2-second advantage.

“I’m lucky with my road position because Mikko is cleaning and it’s getting more difficult for Petter [Solberg behind me].”

Also enjoying an outstanding morning is Australia’s Brendan Reeves who climbed into the top-10 in his Production Class Subaru and even set the fastest time in his category on the third stage of the day.

“The set-up of the car is starting to come together. We will regroup now at service and go out again over the same stages.”

All of this morning’s stages are repeated this afternoon before another two runs over the Castrol EDGE Super Stage in Coffs Harbour.