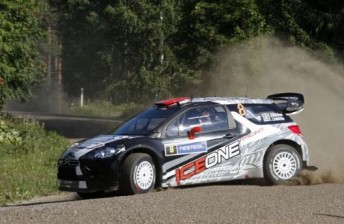 Kimi Raikkonen in action in Finland

Kimi Raikkonen’s ICE 1 Racing operation has been excluded from this year’s World Rally Championship due to its non-appearance in Australia.

Prior to the start of the season, the Citroen team had nominated Rally Australia as one of the two non-European rallies it would contest.

ICE 1 then withdrew from the Coffs Cost event just weeks prior to its start, citing logistical and organisational difficulties.

The team has been fined 16,200 Euros ($21,000 AUD) for the infringement, and is still expected to pay the Rally Australia entry fee.

ICE 1 had been placed fifth in the Constructors’ Championship standings, and is still expected to be seen on the final three events of the season in France, Spain and Great Britain.