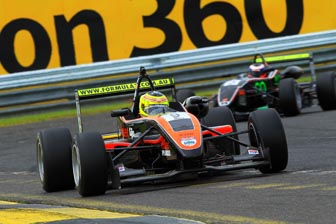 James Winslow has returned to the F3 Australian Drivers Championship with a win, claiming first race honours at Sandown this afternoon.

A mistake from Magro on Lap 2 saw Gilmour through to second, setting a new lap record in his chase for Winslow. By the sixth lap the pair was nose to tail, with Winslow twice forced to go defensive on the front straight as Gilmour attacked.

Winslow did enough to hold on and scored an additional point on the final lap of the race when he re-broke the lap record, re-setting the 10-year-old benchmark to a flying 1m08.889 seconds. Both Magro and Gilmour were both also comfortably under the old lap record.

After missing the previous round of the championship in Queensland, Winslow was pleased to return to the winners circle.

“The car was going really well and I think it’s the first time ever that I’ve been able to get a better start than Chris Gilmour,” Winslow said.

“We had some minor niggling issues throughout practice and qualifying but the car ran faultlessly. It was a great battle with Chris all race and it was great to bring it home.”

The battle for the Forpark Australia F3 Scholarship was just as intense as the one for the outright race lead, Steel Guiliana coming through to lead his team-mate Josh Burdon to a class 1-2 finish.

Ben Gersekowski made a strong start and led the race early but was shuffled back on lap two after being forced to take evasive action when John Magro bounced over the kerb at Turn 4. That allowed Guiliana and Burdon through to take the class victory.

The results close up the battle for the F3 Australian Drivers Championship title with two races still remaining this weekend, Gilmour now leading Magro by just 18 points – with Winslow a further six points further behind. There are 34 points up for grabs across tomorrow’s two races.