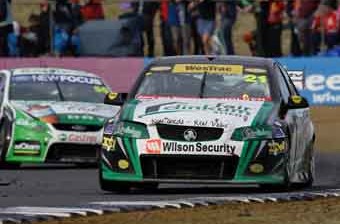 It has been a roller coaster 2011 season for regular Fair Dinkum Sheds Racing driver Karl Reindler. After starting the year towards the rear of the field, Reindler chipped his way into form, highlighted at his home track Barbagallo Raceway where in Saturday’s race, he qualified in the top 10 – and finished there.

On Sunday, his life was turned about face when his Commodore burst into flames after being rear-ended at the start of Sunday’s first race.

Since then, a couple of solid results have come Reindler’s way, and after showing strong form at Bathurst last year with co-driver David Wall, this pair might be worth a flutter for a top 10 finish.

Could Reindler and Wall make some hopeful punters rich?