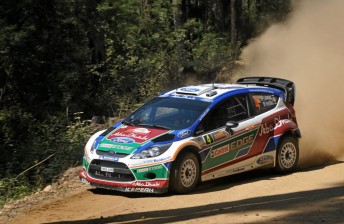 Jari-Matti Latvala is in the box seat at Rally Australia

Conditions could not have been more different from yesterday. In contrast to the rain which made the clay-surfaced dirt roads slimy and treacherously slippery, blue skies and warm sunshine made driving much easier.

The roads south of Coffs Harbour were mostly dry with damp patches in the forests beneath the dense tree cover.

As overnight leader, Hirvonen headed the start order and while the damper areas provided good grip, the drier sections were covered in loose gravel. His Fiesta RS WRC swept the slippery stones from the surface to leave a cleaner and faster line for Latvala behind.

Latvala, who began the day seven seconds behind his colleague, took full advantage in the opening test and set the fastest time by more than eight seconds promoted the 26-year-old Finn into the lead. He went on to complete a clean sweep of stage victories in the morning to build a 17.2sec margin over Hirvonen.

The passage of cars in the BOSCH Australian Rally Championship and historic categories further down the order ensured the roads were even dirtier when they were repeated this afternoon. With the Ford duo under no pressure from behind, Latvala did not need to take risks and measured his pace through the remaining stages.

“I didn’t drive cautiously this morning, but I didn’t take any risks either,” said Latvala.

“My driving wasn’t perfect this afternoon, but the roads had a fantastic rhythm and I really enjoyed them. There was a good spirit in the car all day because it was my co-driver Miikka’s birthday and I hope that leading the rally tonight was a good present for him!

“First and second is a great position for the team to be in tonight but there’s still a long way to go, so we must avoid risks and manage our pace correctly tomorrow. Concentrating fully on my driving will be the most important thing. If I can do that, then I hope the rest will take care of itself.”

Despite having to sweep the roads, 31-year-old Hirvonen was twice second fastest this morning. While keeping a wary eye on the pace of third-placed Petter Solberg in a Citroen, he continued to set a strong pace throughout the afternoon to complete the day 36.8sec clear of the Norwegian.

“The roads were much drier than we expected after yesterday’s rain and first in the start order was a slippery place to be,” said Hirvonen.

“Even in the forest areas the roads were only damp, rather than wet. The stages were flowing and I found a good rhythm and felt relaxed. It was trickier than I thought and because the roads were drier than anticipated, our car set-up was perhaps too soft this morning.

“The afternoon was also not easy. There were no clean tracks because the cars lower down the entry took a different line through the corners during their first pass, and messed up the clean route that had been created. Jari-Matti will sweep the road for us in the morning but we must be careful because there are some tricky places in the long stage. The roads are fast and narrow and I must be brave and put full trust in my pace notes.”

The final leg of Rally Australia heads north to the Clarence Valley shire and is the shortest of the weekend. After a 6am start in Coffs Harbour, competitors tackle two identical loops of three stages covering 98.82km. At 30.00km, the middle test of the loop is the longest of the rally. The final 4.58km Power Stage, which will be broadcast live on ONE HD, offers bonus points to the fastest three cars.