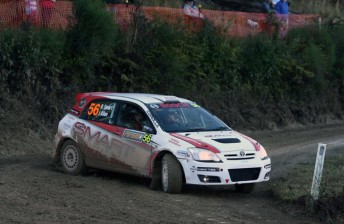 Ryan Smart has consolidated his early lead in the BOSCH Australian Rally Championship Coffs Forest Rally finishing the first full day of stages with a commanding 99-second lead after a challenging run through the rain soaked forests west of Coffs Harbour.

Smart in his Toyota Corolla started the forest stages with a 2.9-second lead over championship rival Justin Dowel and charged through the wet and slippery stages as both Dowel and his other main rival Mark Pedder struck problems and were forced out.

The demise of Pedder and Dowel saw Queenslander Steve Shepheard finish the day in second with the high revving two wheel drive Honda of Eli Evans again proving its pace on the fast and flowing roads just 1.8-seconds further back.

Pedder crashed on the tough Shipmans stage while Dowel had two offs the second ending his chance of scoring points on Leg 1, his Mitsubishi Evo IX being towed back to the service park for repairs with the hope of a return on day two to score some championship points.

For Dowel the slippery conditions saw him lose around 15 seconds in the second stage before he went off the road on the final forest stage of the day. His Evo IX also returned to the service park on a trailer and has been repaired for a restart today. 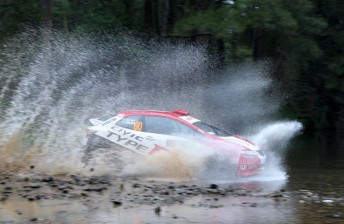 Using roads that had been made more slippery by the passage of the powerful World Rally Cars ahead of them, the Bosch ARC contenders had to fight for grip on the fast and testing sections through the forests of the Great Dividing Range before a return to the damp tarmac of the Castrol EDGE Coffs Super Special stage.

For Smart it was a clever drive staying out of trouble while still pushing hard to maximise his points to haul in series leader Dowel before the final Bosch ARC round in Victoria in November.

“It was a real balancing act trying to go as hard as possible without going off the road,” said Smart.

“The Corolla is just so driveable and really hummed and luckily we were able to keep it all together and grab maximum points.

“We still have to get through day two and there are some very fast challenging stages down around Macksville that we have to complete and we are taking it one stage at a time.”

In the Rallyschool.com.au Australian Junior Challenge WA brother and sister team of Tom and Nerida Wilde in their Subaru lead the four-wheel-drive category finishing the day in eighth outright 18.1 seconds ahead of SA driver Sandy Nott in his Mitsubishi Evo IV while Junior Challenge wild card finalist James Rodda is third in his Subaru. In the two-wheel-drive category Will Orders has his Nissan Silvia at the head of the pack 1min 45.1 clear of the Falcon XR6 of Stephen Turner with the Nissan Bluebird of Ross Allen in third another 35.1 seconds behind.

In the Coffs Classic Rally Stewart Reid again holds the upper hand leading the heritage category in his Ford Escort RS1800 by more than a minute from the Datsun P510 of former Coffs local Wayne Hoy with five times Australian Rally Champion Ross Dunkerton third in his Escort. The classics will run through until Sunday afternoon completing an extra day while the Bosch ARC cars will cross the finish podium on tonight.