Citroen back in the Rally Oz action

Citroen back in the Rally Oz action 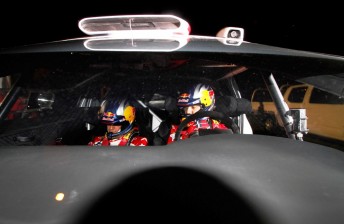 Sebastien Ogier is back in action at Rally Australia

Both Citroen Total World Rally Team drivers Sebastien Loeb and Sebastien Ogier crashed on the opening leg leaving their mechanics with plenty to do on their damaged DS3 WRCs. Loeb rolled on Friday’s fourth stage before Ogier came to grief on SS6 hitting a tree and causing radiator damage.

Despite having just three hours to carry out the repairs, the French squad easily completed their work. Ogier is this morning running eighth on the road with Loeb starting two minutes back. Overall Ogier is placed 16 and Loeb is 22nd.

After a wet opening day, the weather is dry and clear with a pleasant 23 degree maximum.

On the day’s opening stage Jari-Matti Latvala set the pace to take the rally lead ahead of Ford Abu Dhabi team-mate Mikko Hirvonen.

Good news for Australia’s Brendan Reeves who is now sitting in 10th position.