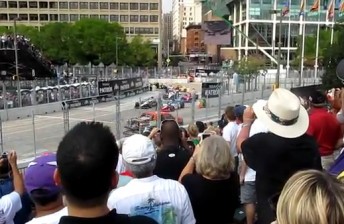 The start of the inaugural Baltimore Grand Prix was 'almost'a disaster

The safety truck driver who almost caused a major incident at the start of the Baltimore Grand Prix has been suspended for two races.

The driver, who has not been identified and is not an IndyCar employee, drove his truck toward the 28-car field as the pack as they exited the first turn.

On the parade lap, the drivers had told their crews that a tyre barrier was out of place at Turn 5. The truck and crew were on the track after they had been asked to adjust it.

He was originally instructed to park the car between turns two and four.

IndyCar described as his actions as not following “proper procedures and protocol” as he was driving the truck to a parking position at turn one.

“It was a near catastrophe,” said Brian Barnhart, IndyCar’s president of competition and operations.

“It was an extremely close call.”

See below for amatuer footage of the incident.