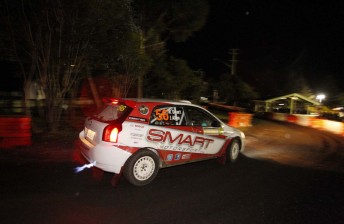 Queenslander Ryan Smart has taken the early advantage on the opening stages of round four of the Bosch Australian Rally Championship being run in parallel with Rally Australia at Coffs Harbour this weekend.

Smart took his Corolla Sportivo to the early lead on the two runs over a rain soaked spectator stage on the waterfront at Coffs Harbour on the opening night of the Coffs Forest Rally as he tries to regain the lead in the championship after relinquishing it in the previous round in South Australia.

The young Queensland Toyota driver takes a two second lead into the first full day of forestry stages in the hills behind Coffs Harbour on Friday with second placed Mark Pedder in his Mitsubishi Evo IX sure to apply the pressure on the fast and challenging stages.

Justin Dowel slotted his similar Mitsubishi into third place a further 2.9 seconds back while North Coast brother and sister team Michael Boaden and Helen Cheers were fourth in their Mitsubishi Evo IX just 1.7 seconds behind Pedder.

Smart was cautious about the lead realising that once the rally heads in to the forests the battle will hot up and the pressure from the Unrestricted Lancers will be fully felt.

“It is a long rally and it will be tough against the Unrestricted cars on what are some very hilly stages where power is going to be a very big advantage but we will try our hardest and see what happens,” said Ryan Smart.

Smart and co-driver John Allen start this fourth round of the five round title 21 points behind Dowel but with a maximum of 80 points on offer this weekend Ryan is confident of taking back the lead back from Mitsubishi rival.

The Coffs Forest Rally competitors will run two of the three days scheduled for Rally Australia completing the same Friday and Saturday stages as the World Rally Cars leaving the Sunday stages to the World Championship contenders.

The Rallyschool.com.au Australian Junior Challenge contenders are also closely bunched after the opening special stages with Victorian Will Orders in his rear drive Nissan Silvia holding a 3.4 second lead over West Aussie Subaru driver Tom Wilde while Adelaide wild card winner James Rodda has his Subaru in third a further 4 seconds back.

Meantime in the Classics Queenslander Stewie Reid has his Ford Escort RS1800 leading the heritage category by 4.3 seconds over Jeff David in his Porsche 911 and Henry Nott third in his Datsun P510.