Long before Australian Touring Cars and V8 Supercars racing could be seen live on television, or websites provided immediate information and results, the fans had to rely on newspapers, specialist magazines and radio to know who had won a race and what had transpired at the track.

People like Paul Weissel CLICK HERE were committed to motor sport and pushed hard to give it some presence on radio – but it was not widespread – magazines came out with results days and sometimes weeks after the event, but it was newspapers that gave ‘almost’ immediate coverage.

Until recently, V8 Supercars has had a battle on its hands to be included in the daily papers, but Ray Kershler was one journalist that pushed hard to increase its coverage.

Kershler was the senior sports writer at Sydney’s Daily Telegraph – which is part of newspaper market leader News Limited (which includes The Herald Sun and The Courier Mail to name two).

A career in news started in 1965 when Kershler began with The Daily Telegraph as a copy boy. Within 18 months he had impressed the powers that be and he was offered a cadetship – which is newspaper talk for apprenticeship.

“Cadetships in those days were supposed to be four years but if you were any good you became a graded journalist after three years,” Ray Kershler explained to Speedcafe.com.

“That happened to me and in the three years I received terrific training in crime reporting, court reporting, local council reporting, parliamentary reporting and general reporting.

“The only sport I did was the occasional extra shift when I would phone in the scores from a rugby match.”

“One of my mates was assigned to cover the Sydney Showground speedway on Saturday nights and so I often went along to keep him company,” said Kershler.

“So, I suppose that was my introduction to motor sport – being covered in dirt from the speedcars.”

In the years that followed, Kershler’s star within the paper continued to shine. He graduated to Night Chief of Staff and then took the prestigious role of Chief of Staff.

In 1981 he was appointed Editor of the Sunday Mail in Queensland, he then went overseas and became the London Correspondent for The Daily Telegraph before returning home as a feature writer.

It was his story on the death of St George rugby league star Brian “Poppa” Clay that convinced the editor that he should be a sports writer – which he did for the next 20 years. 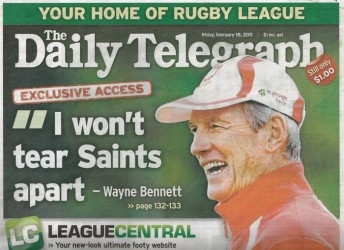 Ray Kershler worked at The Daily Telegraph on and off for 40 years. Being a Rugby League paper, it was often difficult to get a V8 story included

“I first wrote about motor sport by covering the Bathurst 1000 in the late ‘80s,” said Kershler.

“Wayne Webster did the race reports and I did the “colour” stories.

“Then the Shell series, as it was, went truly national and I was invited to Darwin to cover the first round up there.”

Back then Kershler had to push hard to give motor sport recognition.

“In those days it was terribly difficult to get motor sport stories in the sports section,” said Kershler.

“So for a long time the rounds of the V8 championship appeared nowhere.

“I remember covering the Adelaide race one year and the Telegraph ran three sentences. The race had attracted a weekend audience of over 300,000 and the V8s got three pars!”

It was only when V8 Supercars took out some advertising that readers saw more motor sport.

“V8 management kept knocking on the newspaper doors and eventually with the help of some advertising deals the V8s began to get regular space in the papers and I was the one writing the stories,” said Kershler.

“When I told the editor I would like to turn the V8s into a regular round he said: OK, as long as it doesn’t interfere with the rest of your work.

“Of course, eventually it overtook the rest of my work and I stopped writing stories about rugby league, tennis, cricket, golf etc and concentrated on the V8s.”

“To get a V8 story on the back page of the paper was the Holy Grail,” said Kershler.

“I made it twice, once when Russell Ingall let fly at Richard Mork in the Bathurst warm up (and got into a fair bit of trouble), and secondly when I announced Peter Brock would return to racing.

“The Brock story was a good get but it was moved inside for the city edition because of the Friday night footy game. That was what we were up against.” 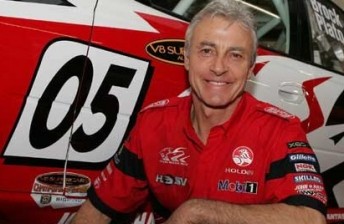 The Ingall versus Skaife incident at Eastern Creek was one of the biggest moments in V8 history and was covered by Kershler.

“I think it went on too long but it did seem to raise the level of awareness in the general public about the fire in the belly of the good drivers.

“For years we tried to convince people, V8 management and the drivers themselves, that controversy was a good thing, but they seemed hardwired to the softly softly approach which has a lot to do with not offending the all important sponsors.

“If nothing else the chemical reaction between Ingall and Skaife made people realise that there’s no such thing as bad publicity – even in V8 racing.”

Covering V8’s for over 15 years saw Kershler cover the biggest stories in the sport.

“The best story, well, anything to do with Brock of course,” said Kershler.

“There were also some very thrilling Bathurst 1000 events, the first race in Shanghai, the HRT ban threat (CLICK HERE for Kershler’s story) and many from the Marcos Ambrose era.

“Actually the one which always comes to mind was relatively minor in the scheme of things.

“I was sitting at home on a day off one day and a contact rang and said: You’re not going to believe this.

“It was the story about Team Dynamik being caught illegally testing at Woomera rocket range.

“Even the sports editor could see the value in that yarn without too much explanation. 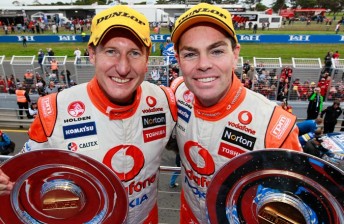 Mark Skaife and Craig Lowndes were always good for a quote

“I had the scoop and The Daily Telegraph ran the story the next morning but other interstate papers in our group who were entitled to use the copy didn’t run it until days later; I don’t think they could believe it.”

Covering motor sport as long as he did, Kershler knew all of the drivers and spoke to them regularly, rating Craig Lowndes and Skaife the best – both on the track and off.

“Craig Lowndes made it all look so easy and he was very generous with his time,” said Kershler.

“As far as quotes go, Mark Skaife was the most erudite. He could say something news worthy in 20 seconds that would take some of the other drivers 30 minutes (to say).

Kershler decided to put the cover over the typewriter in 2007 when he was offered a retirement package.

“At the start of the 2007 V8 Supercar season The Daily Telegraph offered me a retirement package,” said Kershler.

“It took me six months to make up my mind but eventually I decided to accept.

“I finished off the season as a freelance and then went to Europe for a year with the family.

“People who aren’t retired can’t understand the freedom of retirement.

“Now I’m back in Sydney and life is very quiet. I potter around the back yard, go to the local rugby and watch all the sport on TV.”

Journalists constantly get hounded by teams, media managers and the manufactures for stories and often don’t get what they want because there is only so much room in a paper.

Being interviewed for ‘Where are they now?’ has given the ex-journo an opportunity to finally set the record straight on those that think there is favoritism and therefore a reason why their story did not get up.