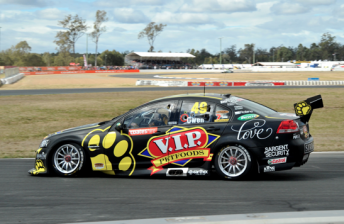 Paul Morris Motorsport is close to having a brand-new Triple Eight-designed chassis ready to compete, if needed, at the Bathurst 1000.

The Norwell-based V8 Supercars team has been quietly bolting together a new chassis, earmarked to be Steve Owen’s #49 VIP Petfoods Commodore.

The car is likely to be the very last brand-new V8 Supercar to hit the race track before the Car of the Future rules come into play in 2013.

According to team owner Paul Morris, the car could have been ready months ago, but incidents to his team’s regular cars has set the project back.

“We’ve had a chassis there, and we’ve just been building it slowly,” Morris told Speedcafe.com.

“We’ve had a couple of decent shunts this year, so that put the program back a bit, because we’ve had to rebuild both cars this year.

“Fixing them has eaten into the build of the new car.”

Morris says that the new chassis could be ready as soon as Bathurst, but it will depend on what condition the team’s two cars leave The Island circuit.

“It will all depend – If we come out of Phillip island and the cars are pretty straight and we don’t have to buy $200,000 worth of new bits, there’s a possibility we’ll just keep what we’ve got,” Morris said.

“If things are torn up, we’ll look at it. You never know what is going to happen.

“As I say, it all depends how we come out of Phillip Island. I’m not in a rush, but if we’ve got time, we will.”