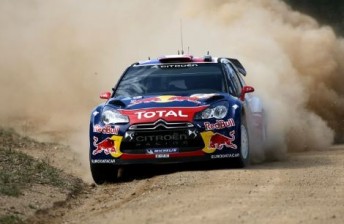 The opening forest stages of Rally Australia have taken some major scalps, with Sebastien Loeb and Ken Block both striking trouble this morning.

Having won the opening stage of the day to take the overall rally lead from team-mate Sebastien Ogier, Loeb rolled his Citroen multiple times after running wide and clipping a bank. just 1.3km into Stage 4.

The Frenchman and his co-driver Daniel Elena both escaped the incident without injury, but have been forced to withdraw from the rest of the day’s action.

Block meanwhile failed to complete Stage 3 – running off approximately one third of the way into the test.

The Monster Ford is understood to have impacted a tree with its roof, while its left-rear wheel was torn off in the impact.

Jari-Matti Latvala rounds out the top four, despite damaging his Ford Fiesta by running wide early in Stage 3.