The Ford Abu Dhabi World Rally Team has finished the opening leg of Rally Australia in a commanding position after a wet and dramatic day in the forest.

Finland’s Mikko Hirvonen heads team-mate and countryman Jari-Matti Latvala by seven seconds, with the Citroen of Petter Solberg a further 44 seconds back.

Hirvonen took two stage wins on the day compared to Latvala’s four, but it was his consistency that has him at the head of the field after some of the trickiest conditions the WRC regulars have seen in a long time.

Loeb rolled while leading on the day’s second stage (CLICK HERE for that story), while Ogier crashed into a tree in the afternoon’s first stage while also placed at the head of the field. Both cars are expected to re-start under the SupeRally rules, but will incur hefty time penalties.

All the leading runners spoke of the tricky conditions, including the Ford factory drivers.

“Conditions were hell and I’m just happy to be here tonight,” said Hirvonen.

“To lead is a bonus. It’s too early to think about winning because in these conditions, just finishing will be tricky. It was difficult to pick a line into corners because the grip was so unpredictable. When I touched the brake it felt as if I was driving on ice, and this was one of the most difficult days I have had in my career.

“The opening stage was incredibly fast and equally slippery. There were sections where we clocked 190kph. About 2km after the start I slid wide in a fourth gear corner and hit two metal posts. It knocked my confidence and I was too cautious afterwards. I made my own mistakes today, but others made even bigger errors,” he added.

Latvala started the day third, but the 26-year-old Finn lost 20sec in the opening stage after a spin. He bounced back to claim third place during the morning, and then took second as the attrition continued this afternoon. 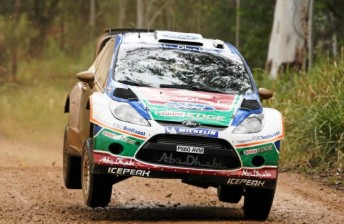 “It was a hugely demanding day,” said Latvala.

“Perhaps I didn’t respect the conditions as much as I should have done this morning, but I ensured that I did exactly that during the second loop.”

New Zealand’s Hayden Paddon leads the Production Car World Rally Championship section and is seventh outright despite reporting that he went off the road on several occasions.

“I don’t care about how much time I lost,” said Padden.

“I’m just so relieved to be here.”

Brendan Reeves is the highest placed Australian in 11th overall and is pleased to be knocking on the door of a top-10 heading into Saturday’s stages.

“We really drove to the conditions and didn’t push it over the limit. Plenty of others did and to see the likes of Loeb and Ogier on the side of the road certainly showed just how difficult it was.”

Those not to make it through the day included Ken Block, Evgeny Novikov, Daniel Oliveira, Peter Van Merksteijn and Nathan Quinn.