Ford in command after eight stages

Ford in command after eight stages The pair shared the Stage 7 and 8 wins, with Latvala benefitting from running behind Hirvonen on the road to claw back 2.8s in Stage 8.

Citroen privateer Petter Solberg is third, 41.4s off the lead, while Henning Solberg trails his brother by a further 1:43s.

Ford drivers Matthew Wilson and Khalid Al Qassimi continue to round out the WRC runners, while New Zealand’s Hayden Paddon is seventh in his Production specification Subaru.

Disaster struck six of the 12 WRC cars entered for the event today, with Evgeny Novikov (Ford) and Peter van Merksteijn (Citroen) joining the list of opening leg retirements having hit a rock and suffered two punctures respectively in Stage 7. 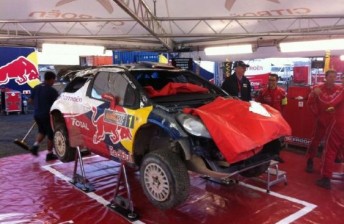 Loeb's car back at service. pic: Luke Elvy, via Twitter

Two passes through the Castrol EDGE Super Special Stage will be held tonight before the cars return to the forest for Stage 11 tomorrow morning.

It is not yet known if the cars of Block, Loeb and Ogier will be fit to take advantage of the SupeRally rules and rejoin the rally.