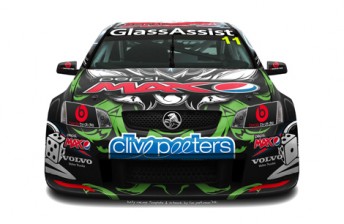 Pepsi Max Crew driver Greg Murphy has chosen the livery that will be applied to his Commodore for the Supercheap Auto Bathurst 1000.

From the thousands of entries in Pepsi Max’s ‘Skin It To Win’ livery design competition, Murphy has selected a design complete with gnashing teeth and lucky dice.

Murphy, driver of the #11 Kelly Racing-prepared Commodore VE, will team with Danish driver Allan Simonsen in ‘The Great Race’ at Mount Panorama.

“There were thousands of entries but this design had that special something you need on Mount Panorama,” the four-time Bathurst 1000 winner said.

“Robert has done a great job to capture the vibe and ferocity of the Pepsi Max Crew with his design.”

This is the fourth graffiti-inspired livery to be applied to the Pepsi Max Crew Commodore this season with the previous designs coming courtesy of professional graffiti artists from across Australia.

The ‘Skin It To Win’ promotion challenged fans to design something special for Bathurst. The ‘High Roller’ design will remain on the car from Bathurst until the penultimate event at Sandown Raceway. A fifth design will be applied for the final event of the 2011 V8 Supercars Championship at the Sydney Telstra 500.

Hooper relished the opportunity, creating an electrifying livery with vampire fangs wrapped across the rear and a pair of dice on either side of the car’s front end showing a five and a one – a testament to Murphy’s historic ‘51’ racing number.

“I was pretty much speechless after I had been told I was the winner,” Hooper said.

“I thought it must have been a joke! I can’t believe I sat back designing this in my living room and now it will be zooming around The Mountain in October.”

The Supercheap Auto Bathurst 1000 will be held on October 6-9.