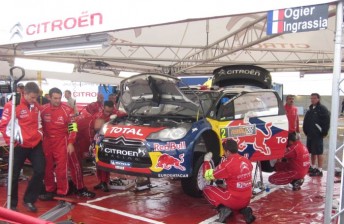 Sebastien Ogier's Citroen in service prior to his crash

Sebastien Ogier has joined Citroen Racing team-mate Sebastien Loeb in crashing out of the lead of Rally Australia on the opening day.

The 27-year-old Frenchman slid off the road at the 22.6km point of Stage 6 – making contact with a tree. While Ogier and co-driver Julien Ingrassia are both unhurt, the duo could travel further than one kilometre after the impact due to the extent of the damage to the front of the DS3.

Heavy mid-morning rain has led to extremely slippery conditions for the drivers, with new rally leader Mikko Hirvonen enduring his own off-road excurison during Stage 6 before describing the roads as “like ice.” 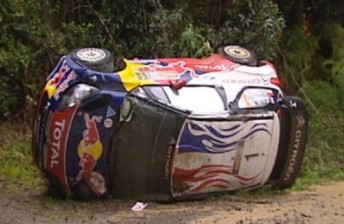 Petter Solberg sits a further 28.4s back in third, while Evgeny Novikov and Henning Solberg round out the top five.

Two forest stages remain this afternoon before the field heads to the Coffs Harbour waterfront for a further two timed runs on the Castrol EDGE Super Special Stage.