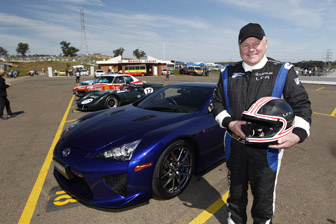 Former Formula One world champion Alan Jones has joined forced with Lexus to become a brand ambassador for the Lexus LFA Supercar.

“It’s great to get out to these kind of events, and fantastic that Lexus is getting involved in such a hands on way,” said the 1980 F1 world champ.

Jones will act as driver ambassador for the LFA, with owners of the LFA receiving one-on-one high performance coaching with the former F1 ace.

Peter Evans, Lexus Corporate Manager, Marketing and After Sales, says that the LFA is a race-inspired supercar and Jones’s racing pedigree makes him the perfect man for the job.

“Alan is a true Australian champion, and the last Australian to win the Formula One World Championship,” said Evans.

“He was the perfect choice for Lexus, giving us the ability to properly demonstrate the abilities of our LFA, IS F and F-Sport models.

“His popularity with the general public at the Formula One Grand Prix only reinforced that sentiment. Alan is a genuine superstar.”

Jones has also debuted a brand-new helmet, made from ultra modern carbon fibre materials with a hybrid colour scheme that will be familiar to many older race fans.

“The helmet is just fantastic. It is made from carbon fibre, just like the LFA, and has a modern day interpretation of my 1980 championship livery,” said Jones.

“Just like the LFA, it’s the latest in technology, with the history of my red on white stripes laid over the top. I think it looks sensational.”

Over a career spanning 11 years, Jones won a 12 Grand Prix from 116 starts, with his last F1 race start at the Australian Grand Prix in Adelaide in 1986.