WesTrac signs as Fiore backer for 2011

WesTrac signs as Fiore backer for 2011 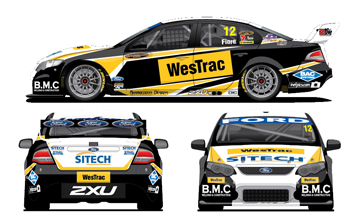 Dean Fiore’s Triple F Racing team has locked in the support of WesTrac for the remaining rounds of the 2011 V8 Supercars season.

Fiore’s Ford Falcon will adorn the mining company’s brand down the flanks of his car.

The #12 Falcon has seen a number of companies rotate as its title sponsor this season. Fiore conducted a unique sponsor raffle after the Townsville event, which was won by stunt driver Robbie Bolger, securing him naming-rights of the car for the remainder of 2011.

Bolger has decided not to use the space on Fiore’s Falcon to advertise his own brands, instead, stricking a deal with WesTrac to take the primary position.

“Robbie won our competition, but he doesn’t want to pump his business,” Fiore told Speedcafe.com.

“To make sure that we aren’t wasting the space, I’ve helped those two come to an arrangement.

“It’s great to have WesTrac on our car. It’s such a well-known brand. WestTrac is actually the parent company of Sitech (Fiore’s season-long bonnet sponsor), so we already have a link there. It has worked out very well for us.

Fiore and endurance co-driver Michael Patrizi tested at Queensland Raceway on Monday, and Fiore says that he is confident they have a good package for the L&H 500 Phillip Island next weekend.

“We gave Michael plenty of miles and he did a great job. He did a lengthy race run with minimal drop off, so he achieved everything that we wanted,” Fiore said.

“We tried a few things and did lots of pre-enduro stuff. We’re feeling good for Phillip Island. I was watching some footage from last year, and our car was a fair way up the grid and we were fast. We’ve got some good stuff going on too, so we’re going to try and improve where we were.”