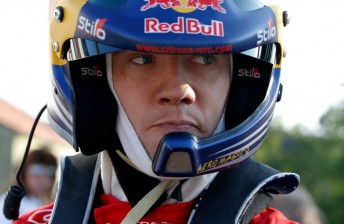 Loeb won the repeat run by just a tenth of-a-second to trail his younger DS3 teammate by 0.6secs heading into the first full day of running.

“A good start but everybody knows the real start is tomorrow,” said Ogier.

“But it was fun. Quite slippy not easy to find the right rhythm. The car was very good so I’m happy.”

The factory Ford Fiesta duo of Jari-Matti Latvala and Mikko Hirvonen are third and fourth and very much in contention heading into a full day of running on gravel stages that are sure to suit the flying Finns.

The best of the Australians is local Nathan Quinn in 14th place overall.

The first stage on Friday is the 29.1km Shipmans 1 starting just after 10am.

The weather is expected to be wet.

Rally Australia leader board after Stage 2