Make or break for Pedder at Coffs Coast Rally

Make or break for Pedder at Coffs Coast Rally 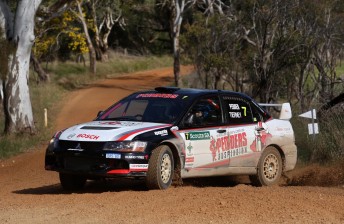 Mark Pedder has stated "Catch me if you can!" to his rivals in the ARC in Coffs Harbour

Mark Pedder has set his sights on nothing short of victory at BOSCH Australian Rally Championship component of Rally Australia at Coffs Harbour beginning tonight.

The Pedders Suspension Rally Team crew enter this weekend’s Coffs Coast Forest Rally sitting third outright and Pedder says that it is a matter of “make or break” as the domestic series enters the business end of the season.

“Certainly the engine dramas in heat two at our last event (Scouts Rally SA) have put us behind the leaders but we are still in touch,” said Pedder.

“We need a win here to ensure that we can be in the mix for the final round, my home event Rally Victoria in mid-November.”

Pedder and co-driver Lee Tierney have had a chance to conduct pre-event reconnaissance on the Coffs Coast Forest Rally roads and are extremely confident that they will have the package to take their maiden national event win.

“The event uses the best roads from last year’s Coffs ARC event plus some new roads which are generally smooth and fast and well suited to our Race Torque prepared “unrestricted” Mitsubishi Lancer Evolution 9,” said Pedder.

“We have been improving our pace all year and took some stage wins in South Australia and I am extremely confident that we have what it takes here. It certainly would be very special to win the most prestigious event on the calendar.”

Pedder has issued a final passing warning to his main rivals in the 2012 BOSCH ARC, Justin Dowel/Matt Lee and Ryan Smart and John Allen.

“Catch me if you can!” said Pedder.

The Coffs Coast Forest Rally kicks off Thursday night 8th September with runs around the Super Special Stage on the Coffs Harbour foreshore in front of thousands of rally fans and then continues on Friday and Saturday with forest stages inland.