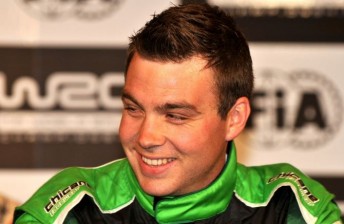 New Zealand’s Hayden Paddon says he won’t be thinking about the potential to create WRC history for his country as he begins his Rally Australia campaign tonight.

The 24-year-old could become the first driver from the Southern Hemisphere to win an FIA World Rally Championship title as he takes aim at the Production Car crown this weekend.

With PWRC rules calling for competitors to nominate six points-scoring rallies per season, Paddon has won each of the three events he has contested so far, and currently sits 50 points ahead of nearest rival Martin Semerad – who is not competing in Australia.

“We’re not going to worry about it until the last day,” Paddon told media, including Speedcafe.com, of the championship.

“The stages on the last day are a bit more technical and tricky, which is quite to my liking. So if we get to that point we can maybe then think about the championship, but in the meantime the first two days will be flat out.

“I’m putting a lot of pressure on myself to find more time and go a bit quicker. As a goal off to the side I’d like to get into the top 10 and get some Drivers’ Championship points this weekend.

“We’ve got to keep aiming high and I think that it’s a hard challenge but we can give it a good shot.”

With Paddon’s regular team, Belgian squad Symtech Racing, not travelling to Australia, the CR Properties/Placemakers backed driver will compete with his newly formed New Zealand World Rally Team in Coffs Harbour – a point that Paddon says would make wrapping up the championship here even more special.

“To do it so close to home would be incredible, particularly with our New Zealand team here,” said Paddon.

“It’s unfortunate that our European team couldn’t come down, but we still have my New Zealand team here who do a fantastic job. They’ve been with me for 14 or 15 years, so to do it with them would be great.”

Paddon says he’s currently working on his plans for 2012, with a seat in a World Rally Car not being ruled out.

“We’re going through the process of trying to find a budget and fingers crossed we can step it up next year, perhaps into another class of car and keep moving forward.

“We’ve got a plan in place – we don’t want to rush ourselves because we need to take the most logical steps to ensure we’ve got the necessary experience and mileage.

“For instance, if there was an opportunity to get into a World Rally Car, it would take some time to get there speed wise.

“I’m never going to say no to that sort of opportunity, but we’ll see what comes out of the woodwork.”