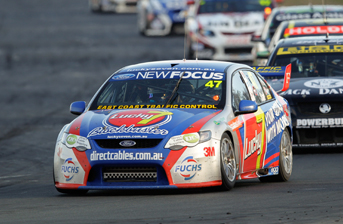 The 11th episode of the IRWIN Tools Endurance Countdown looks at the Lucky 7 Racing.

Tim Slade and Daniel Gaunt will enter the 2011 endurance races as one of the underdogs, but judging by Slade’s speed in the #47 car in the last event at Queensland Raceway, ‘underdog’ might be underestimating their potential.

Slade, driving the Stone Brothers Racing-prepared Falcon, finished with three podium results at the Ipswich circuit, ahead of the two lead SBR cars.

Like many others, Slade’s team-mate Gaunt will drive his regular Porsche Carrera Cup in the support races at both Phillip Island and Bathurst – so track miles won’t be a problem for him. And don’t forget, Gaunt is no V8 rookie, having competed in enough V8 races to know how it is done.

Is the #47 a sneaky outside chance for a podium … or better?