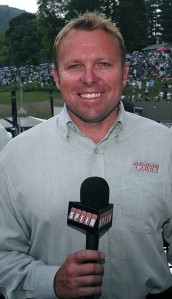 V8 Supercars has secured a coup with US network SPEED announcing it will televise both the Supercheap Auto Bathurst 1000 and the Armor All Gold Coast 600 live and in prime time in North America next month – and the network’s commentary team will include one of Australia’s best motorsport exports, Leigh Diffey.

SPEED will be sending a full commentary team, which is set to include Diffey and his regular partner in crime, Englishman Calvin Fish with the remainder of the crew to be announced in coming weeks.

SPEED will operate from a specially-prepared booth in pit lane at both events.

The new deal puts both the Bathurst and Gold Coast events alongside major international events such as the Monaco F1 Grand Prix, the Indianapolis 500, the Daytona 500 and the Le Mans 24 hour – which all receive similar coverage in the US.

Both live telecasts will be promoted extensively not only on Speed but also on its parent FOX network through News Corporation’s wide array of multi-platform US-based sports assets.
Diffey was the original host and play by play commentator for Network Ten’s award-winning coverage of V8 Supercars beginning in 1997.

Fans will also remember him as a former host of Network Ten’s Sports Tonight program and recently he has returned to Australia over the Christmas-New Year period to host local golf coverage.

“It’s been five years since I last called Bathurst – the last one on Network Ten,” said Diffey.

“I am thrilled to be going back to the mountain and to bring it to the American audience for the first time live in its entirety makes it even more special.

“My friend and regular partner-in-crime at Speed Calvin Fish is also making his first journey to Bathurst, and is very excited. He’s one of the best in the business.

“We get asked a great deal about V8 Supercars and Bathurst here in the States, so I know the viewers will be delighted to have such an extensive coverage for the first time. This is not only a SPEED, FoxSports supremo David Hill is right behind this and wants it to be big.

“I have lived and worked in motorsport all around the world. To be able to say I’m going home to Australia tell the US all about V8 Supercars really makes me proud.

“SPEED has done amazing things for the sport we all love and now to have one of the world’s marquee motorsport events live from flag to flag is massive. We do the same for the 24 hours of Le Mans and now to do it for The Supercheap Auto Bathurst 1000 is icing on the cake!”

Diffey has always been a fan of the Armor All Gold Coast 600 and even more so with the introduction of 28 international co-drivers this year.

Not only will Diffey have his on-track commitments, he will also be a host at the second annual Pirtek Speedcafe.com Legends Dinner on the Gold Coast on Thursday, October 20 (details and guests to be announced soon).

“At last count there were eight different, world-class championships represented by the internationals coming to the Gold Coast. The depth of driver talent is astonishing, coupled with their pure and child-like excitement at racing a V8 Supercar makes for a hell of a weekend,” said Diffey.

“The fact that we will watch guys who know what it’s like to drive through turn one at Indy flat out, negotiate traffic and the elements at Le Mans in the middle of the night and race an F1 car at full force is a true treat.

“V8 Supercars, the Gold Coast and driver names that sound like exotic meals at a restaurant – who could want anything more?”

“I am so proud that my home state of Queensland and V8 Supercars were able to take control of an iconic event that lost its way. In just its second year in this format it truly has the motorsport world buzzing. I have been asked to help get drivers a seat anywhere from Le Mans to Daytona and everywhere in between.”

It follows the announcement in June that V8 Supercars will race at the Circuit of the Americas from 2013, a first for any Australian sport to hold a Championship or points scoring event on American soil.

“This is a massive announcement for Australian sport and a tremendous endorsement of V8 Supercars,” said Cochrane.

“Our sport is acting locally and growing globally every single month. We are on the march internationally and being recognised as such.

“I would like to take this opportunity to thank everyone at FOX Sports and SPEED in America, especially David Hill and Patti Wheeler – North American motorsport fans are in for a real treat with our prestigious races from Bathurst and the fabulous Gold Coast live into their homes in prime time.”

“This is a great opportunity to share one of the signature events in all of motor sports with the Speed audience,” said Wheeler, EVP of Programming and Production for the network.

“Some special arrangements already are in the works as we put together our on-air team and broadcast plans.”

It is significant news for V8 Supercar sponsors, teams and drivers to get such massive exposure in the US through the Speed/Fox platforms, as well as New South Wales and Queensland who host the two prestigious races.