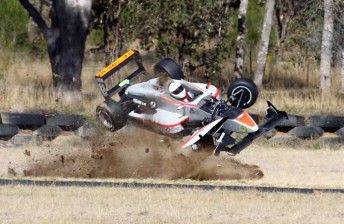 Tasmanian youngster Josh Burdon has repaired his damaged Dallara and will contest this weekend’s round of the F3 Australian Drivers Championship at Sandown.

The 19-year-old spectacularly rolled out of the first race of the most recent Formula 3 round held at Morgan Park in Queensland.

Burdon walked away from the crash thinking it was the end of his season, but has been surprised by the level of support from family.

“My 90-year-old Grandmother, who can rarely leave her house and is on a pension, was the first to send me money to get back on track,” Burdon said.

“She rang me at 10pm on Monday night this week and said she had transferred some money and that I should go and race.

“The support from all of my close family has been incredible and there aren’t enough words in the dictionary that can describe how thankful I am.

Now I need to repay them by doing my best job possible when I get back in the car this weekend at Sandown.”

Burdon’s R-Tek Motorsport Dallara F304 has been repaired since the rollover with the crash only serving to showcase just how strong a modern F3 chassis is.

The Formula 3 Australian Drivers Championship will contest three races at Sandown this weekend, as part of the Shannons Nationals round at the Melbourne circuit.

With this and two other rounds remaining in the championship, Queenslander Chris Gilmour leads the championship by 19 points, with James Winslow in third a further 10 behind.