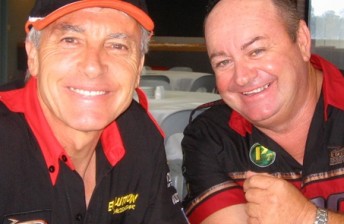 Peter Champion is the owner of the HDT (Holden Dealer Team) brand – a brand that Peter Brock helped build.

Champion was a close friend to Brock and his family, and he remains dedicated to surviving the Brock legacy through his collection of race cars, memorabilia and road car business.

On September 8, 2006, news of Brock’s death in West Australia travelled to the east coast quickly, and Champion was one of the first to have his death confirmed …

CHAMPION: I had just delivered one of my trucks to a maintenance repair shop in Brisbane.

I was in the car with my wife Sandy. She was sitting in the back seat and she took a phone call and all I could hear her saying was “Oh no, no, no.”

Sandy got off the phone from a girlfriend in Melbourne who said that a well-known racing car driver had just been killed in Perth.

Straight away, I got my phone and called Brocky. I left a message asking for him to call me back when he had a chance.

I then called Julie (Bamford, Brock’s girlfriend) and she’d just been told. I could tell by the sound of her voice that was who it was.

SPEEDCAFE: What was the feeling that you had when you first realised that Brock had passed?

CHAMPION: It’s hard to describe. I’d been talking to him the night before, organising to get the Austin A30 ready for the Speed on Tweed the following weekend. I guess it took a while to finally realise what had gone on.

Then everyone started ringing me, as people do when something happens like that.

Sandy and I jumped straight on a plane to Melbourne to be with the Brock family. I was there when his body came back from Perth.

I can’t believe that five years have passed since then.

SPEEDCAFE: You own the HDT brand now – a brand that is synonymous with Brock. Is he still a big part of the brand you carry?

CHAMPION: Absolutely. Without his name attached to it, it would just be another mere three letter brand.
Peter built it, and with nearly 5000 cars on the road, it’s a big thing.

I just feel privileged. I’m in a position where I own a few of his cars – race cars, road cars or whatever. To be able to keep the brand which is 42 years old this year, is quite remarkable to be able to achieve that and keep that going.

The amount of people that still talk about Peter … it was only last Sunday, I was at the Muscle Car Masters in Sydney. They’ve started up that class of replica cars, and to walk around there, I feel great pride in knowing that I own those three letters. You see HDT on all of those cars. There was more replica Brock cars than anything else. I saw four big bangers! It was amazing to see that many on the dummy grid to go out for their demonstration. It was amazing.

SPEEDCAFE: Last year, you released a 30th anniversary HDT car, celebrating the build of the first VC Commodore. Do you have any other Brock tribute cars in the pipeline? 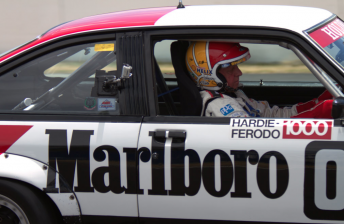 The pair raced against each other for close to 25 years at the highest level, and enjoyed a healthy respect for one and other – even though they were generally seen as the leading lights for Ford and Holden.

The news of Brock’s death on September 8, 2006 came as a huge shock to Johnson, who says today that he had expected the pair to grow old together …

DICK JOHNSON: September the 8th. It’s a hard one to forget for me. It’s between my two children’s birthdays. Steve was born on the 6th, Kelly is on the 11th.

I was doing a ride day for Mazda at Oran Park. I was doing hot laps with some Mazda people.

I got a phone call while I waiting in the car. It was Jilly (Dick’s wife). She said I’ve got some bad news. She said I’ve just got a call from V8 Supercars’ Chaplin Garry Coleman who had said that Brock had been involved in an accident and that he was killed.

It really shocked me. I couldn’t believe it. I said to one of the guys in the car with me “You’re not going to believe this, Peter Brock has just died.”

You don’t want to believe those sort of things, but about 15 minutes after that, I was getting phone call after phone call. I ended up switching my phone off.

SPEEDCAFE: You say you were shocked to hear the news, like most Australians. What were some of your feelings at the time?

JOHNSON: It was one of those situations where it’s living proof that no body is infallable. It was just unexpected news that you thought you were never going to get. I thought we were going to grow old together.

SPEEDCAFE: Five years on, is the Brock legend still as strong as it was while he was still here with us?

JOHNSON: Well, he did an awful lot for touring car racing in this country, not only as a driver, but as an ambassador for the sport in general. 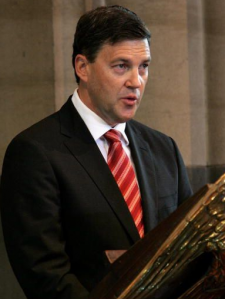 Neil Crompton has kept a tight lid on his involvement in Peter Brock’s funeral … until now.

Five year’s after the nine-time Bathurst winner was killed, aged 61, in an accident during the Targa West rally in West Australia on September 8, 2006, Crompton has spoken on the grief he dealt with in the wake of the death of his colleague, mentor and friend.

Crompton, the voice of V8 Supercars Championship, was the man bestowed with the honour of speaking on behalf of the motor racing industry at Brock’s state funeral on September 19, 2006.

The news of Brock’s death rocked Crompton, and as he explains, it still hurts to broach the subject.

SPEEDCAFE: What were you doing as you heard the news of Peter Brock’s death five years ago?

NEIL CROMPTON: I was driving along and took a call from an old colleague Alison Drower, who used to work with me at Triple M in Sydney, and also on the RPM program.

Now, she is better known as Mrs Rick Bates.

She called me to verify whether it was true, and at that point, I hadn’t heard a word about it. I had a car full of people, and Alison was on speaker, so I laughed it off. Like most people, it was disbelief.

I got home shortly after, had a quick think about it and called Plastic (Holden Motorsport publicist Tim Pemberton). He verified that it was true.

That first call I got, I dismissed. I thought it was one of those things that fly around the traps as a rumour. When I rang Plastic, I was a bit gobsmacked by it all.

SPEEDCAFE: After you’d had a moment to process the news, what were your feelings?

CROMPTON: A mixed combination, really. I was involved with Peter in lots of different ways – as a friend mainly. I was deeply saddened and devestated, just like it is when you have anyone in your midst has this sort of thing happen.

You go through a whole variety of emotions like shock, disbelief, frustration, anger, you bundle it all into one.

Even now from time to time I think about it. At the time, the wider implication of it in my head were ‘What happened? What went wrong? What was the real story?’

The overwhelming thing was the disbelief, and then the frustration that for all the hundreds and thousands of kilometres of motor racing, one particular event and one circumstance caught up with him. I was disappointed for him, deeply saddened and I still am to this day.

SPEEDCAFE: You got to play a very special part in Peter’s funeral, offering a collection of tales and tributes. On reflection, how do you see your involvement that day?

CROMPTON: To be honest, I don’t have a great recollection of all the different sequence of how it happened. The bottom line was that the family asked me to speak at his funeral, which I really didn’t want to do. I knew it was going to be a difficult thing.

In the end, I agreed to do it, because it’s difficult to say no to people when there’s so much grieving going on.

From a personal stand point, it was pretty horrendous to be in that spotlight (that day). The last thing you want to do is stand up in front of your peers, and as it turned out, it was broadcast of every network as well. Thinking selfishly, you’d never do it, but thinking of Peter and thinking others, it was something I was asked to do so I should do it.

I sat down in the days before to try and nut out some key points on what I wanted to say. I tried to extract myself from the moment from when I had to walk up there – you do some hard things in life but that is certainly on the short list of tough things I’ve ever had to do.

Immediately afterwards, for weeks, I was really crook. Just shaking inside and out. I don’t think I can ever remember a time in my life where I’ve felt so much pressure, tension or discomfort. It was a really difficult thing to do.

Subsequently, I’ve said very little about it, and for good reason. I don’t think there was much else I could say that I didn’t say on the day, and that has pretty much been policy since then. I haven’t entered into too much chat about it since then.

It was a very hard thing, and I just remember how painful it was. Where we were seated, we were in a position where we were just looking at this rooten box, with his helmet there. It was impossible to escape. You’d look at your feet, you’d look at the ceiling and ultimately you’d make eye contact with your colleagues who were all in the same uncomfortable position, which only made it worse. It was a very uncomfortable, difficult day.

It’s quite a difficult thing to discuss. It was a long time before I sidled up as a topic. We did a thing last year on the V8 Xtra program where I was editing some stuff – thinking about it, looking at it. That was the first time forever that I’d dealt with that.

SPEEDCAFE: His legacy. Is the Brock name still as strong as it was when he was here sitting with us?

CROMPTON: Yeah. That’s best asked to the fans, and they still have a great affinity with Peter.
You just have to look at what Bathurst means and obviously he is a huge part of that. He remains the biggest part of the Bathurst story.

There’s still a strong connection, and there probably will be for a long time – particularly at this time of the year when we get to the endurance races. The Brock factor is again in the uppermost of our minds.