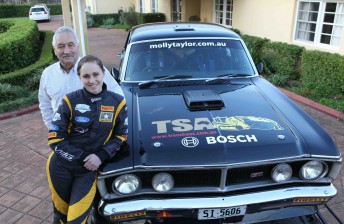 Molly and Mark Taylor with the 1970 XY GT Ford Falcon

In a classic case of keeping it in the family, young Australian rally star Molly Taylor will be doing demonstration laps at Rally Australia ­ in the classic Aussie muscle car her father used to compete in.

Taylor, who is contesting the World Rally Championship Academy development series in Europe this year, will feature on the super special stage of the world rally championship event in Coffs Harbour in a 1970 XY GT Falcon.

Mark Taylor made his name in the big black BP Corse Plus Ford in the 1990s as he spat stones, on full lock and despite the fantastic sound of the Falcon it was barely audible over the screams and shouts of delighted spectators.

Having tested the Falcon last week, Taylor now understands why the car in which her father took equal first in the Aussie Car Class of the 1993 Australian Rally Championship holds such a special place in his heart.

“It’s the polar opposite to what I usually drive ­ they’re both Fords, but mine is a front-wheel-drive, 1.6-litre Fiesta R2, so a totally different experience. And I love it! I can’t wait to get out on the super special for the next three nights.”

Mark Taylor bought the car in 1990, just after it won the South Australian Rally Championship. He kept the full-spec 351 Cleveland GT engine, but swapped drum brakes for four-wheel discs and added Proflex suspension, a Phase Three GTHO close-ratio gearbox and power steering ­ which made it much easier to drive than the Bathurst monsters it was based on.

After many years of fun, her father sold the car to help Molly achieve her rallying dreams, but it hasn’t gone far from the family ­ it’s now owned by one of Molly’s long-time supporters, Dave Thompson of Trenching Systems Australia.

“Dave has always said it’s mine to drive if I want to, so when the opportunity arose to do some demonstration laps at my home WRC event, I jumped at it,” said Taylor.

“I flew into Sydney from England on Saturday morning, turned on my mobile and found a message saying we are going to Wakefield Park race track. Yes, I wanted to drive it, but a few hours sleep might have been nice!

“I certainly hope there’s enough space on the super special because I’m aiming to keep it sideways as much as possible. That’s the way dad always did it ­ and that’s the way it’s meant to be driven. I think the spectators will love it.”

Taylor returns to WRC Academy action over the weekend of September 29-October 2, at round 11 of the WRC series, Rallye de France Alsace.