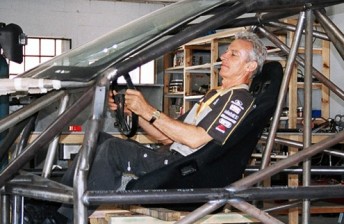 Peter Brock’s last race car has broken cover – but it’s not the Daytona Coupe he was killed in at Targa West five years ago.

A secret plan to launch an all-Australian attack on the Dakar Rally in 2007 or 2008 was well advanced, with Brock slated to drive the Holden-supported V8-powered Adventura.

His sudden death – five years ago tomorrow – in the 2006 rally saw the plans shelved.

Five years since his passing, the car’s builder has revealed the final project that they have been working on for the past few years.

Robert D’Ercole, a Gold Coast-based race car designer, was the man who was dealing with Brock on the Dakar project. The pair had originally planned to compete in the 2006 Dakar, but time restraints set the program back a year or two. 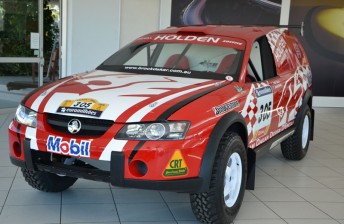 D’Ercole has built the car to its 2006-look, although it does not include an engine or mechanicals.

According to D’Ercole, the car was built to comply with the FIA Rally Raid regulations as they were written in the mid 2000 era. The car was to run in the 4WD class but was also designed to be run as a 2WD if needed to take advantage of the extra freedoms allowed at that period.

Brock and the team were not going there for fun, either. It was to be a fully-fledged race car, capable of challenging for outright honours against the likes of the all-conquering Volkswagons.

The car is based around the shape and dimensions of the 4WD Holden Adventra, the model that Holden were promoting at the time, but uses a bespoke full spaceframe chassis with non-stressed composite outer panels, the same format still used to this day by all outright Dakar cars.

Brock fans have the opportunity to put their name on the Adventura before it is sold at auction. For $25, fans can have their name displayed on the car, with all funds being donated to the Cathy Freeman Foundation, via The Peter Brock Foundation.

Brock’s protege Craig Lowndes is the first to add his name to the charity project.

The tribute car will be sold at auction, with the car expected to be sold for over $100,000.

“It is our intention that this car be utilised one last time, not for racing but to allow all Peter Brock fans to pay their own personal tribute to a racing driver and sportsman,” D’Ercole says on his website ‘Brock Dakar.’

“Everyone is invited to have his or her name applied to the racecar livery and in so doing support the tremendous work of Peter’s lasting legacy, The Peter Brock Foundation.”

CLICK HERE for more on the stillborn Brock Dakar entry and what is being done with the car now.

See below for videos of Brock’s video presentation for prospective sponsors, as well as Lowndes’s promotion for the name donations.