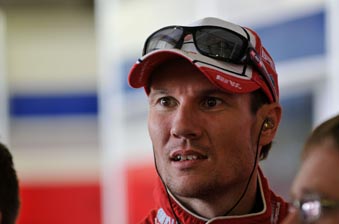 Jason Richards will not compete in the V8 Supercars’ endurance races at Phillip Island and Bathurst.

Due to his ongoing battle with Adrenocortical Carcinoma, Richards has elected to stay on the sidelines while he fights his rare and aggressive form of cancer. It will be the first V8 Supercars endurance races that the popular Kiwi will miss since his V8 debut at Bathurst in 2000.

Andrew Jones, who partnered Richards to third place in last year’s L&H 500 at Phillip Island, will stand in for the Team BOC driver alongside Jason Bright.

The shuffle means that Shane Price will partner Jason Bargwanna in the #14 Jana Living Racing Commodore.

Richards says that his health is more important that the biggest races on the V8 Supercars calendar.

“Although I’m feeling really good at the moment, I haven’t solved my health problems,” Richards said.

“I was hoping to have something by now to indicate we could win the battle with this cancer but ultimately it’s not been the case. Every scan I’ve had has got worse and worse and I’ve not been able to put the brakes on it.

“I have periods where I feel really good and periods when I’m not so good and it’s too hard to determine when they’re going to be. I didn’t want to let the team down.

“I think it would have been my 15th Bathurst and it’s pretty disappointing not to be participating but that’s what life dishes out.

“I still feel like I want to have some input so I will be at Phillip Island pestering everybody and putting my five cents-worth in. I’m still part of the team and keen to be involved.

“It’s actually quite good being a fly on the wall. You pick up a lot more stuff that you miss when you’re more involved. Brad and I have had lots of conversations about what’s happened at the race weekends and we quite frequently totally agree. It’s good to have more eyes and ears in these bigger races and my experience can add a lot of value.

“The cars were so competitive last year and, to be honest, if Brighty doesn’t win I’ll be disappointed.”

“I don’t think there’s one team member, including the drivers, who wouldn’t like JR to be driving the car but his health is the most important thing in the world and clearly he’s still got a titanic battle on his hands,” Jones said.

“It will be great to have him at the event. We talk regularly about the racing and he has a really good feel for what’s going on. He’s still very much part of the team.   “I think Jonesy will make a great substitute. He and JR came third at Phillip Island last year and hopefully Brighty and Jonesy can go a bit further for the team and for JR.”

Here Jason Richards and Jason Bright talk about the decision