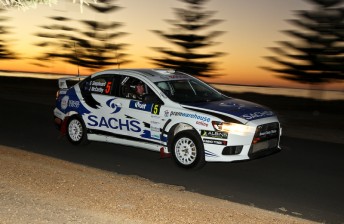 Shepheard will be one to watch at the Coffs Forest Rally

The Coffs Forest Rally has attracted 47 entries for the Bosch ARC section which will be conducted over two days of the WRC event on Friday and Saturday leaving the World Championship contenders and the Classic Cars to compete on the final stages on Sunday September 11th.

Heading into the Coffs Forest Rally in fifth place in the standings, the SACHS Rally Team headed by Steve Shepheard is excited about the event.

“It’s an awesome day for the ARC to be running a full round in conjunction with the WRC, a big step for the series,” said Shepheard.

“Having grown up on Queensland rally roads, I like the flow of the roads down here, you can really get the car dancing from corner to corner, and that’s the sort of road I live for.

“The horsepower of the unrestricted Evo X will really suit Coffs, and after seeing a podium disappear before our eyes last month in South Australia, we are on a bit of a mission this weekend,” said McCarthy.

Team principal and Australian motor sports legend, George Shepheard, has been working nonstop on the Mitsubishi since South Australia, including a full engine rebuild and some minor upgrades.

“In SA the boys gave the engine a big accidental over rev on a jump, and that’s what put us out Sunday morning,” said Shepheard Sr.

“So we rebuilt it from the ground up, including a new radiator set up from PWR.”

The action starts this Thursday night in Coffs Harbour, and then moves to the forest Friday morning.