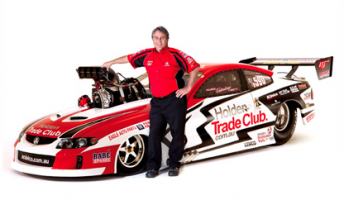 Maurice Fabietti has renewed his partnership with the Holden Trade Club.

The former champion’s latest contract sees him extend his deal with GM Holden into a sixth year where he’ll compete for the third-consecutive year under the Holden Trade Club banner.

Fabietti’s deal for his Holden Monaro Top Doorslammer has been confirmed on the eve of this weekend’s Fuch’s Australian Nationals at Sydney Dragway.

“Our relationship with Maurice Fabietti has been successful from the outset, so we are delighted to continue our agreement with the Holden Trade Club Top Doorslammer team into a sixth year,” GM Holden Aftersales Marketing Manager David Metzke said.

“Maurice is one of the ANDRA Pro Series’ finest and most experienced drivers and we are excited about the opportunities, both on and off the race track, that he and his team make available to Holden Trade Club.”

Fabietti, 49, said he was pleased to have secured the continued arrangement.

“We are proud to represent Holden and the Holden Trade Club and the renewal of our racing contract is a tremendous vote of confidence in our team,” Fabietti said.

“It also enables our Holden Trade Club team to enter the new season confident in our commitment to winning races and the ANDRA Pro Series Top Doorslammer Championship.”