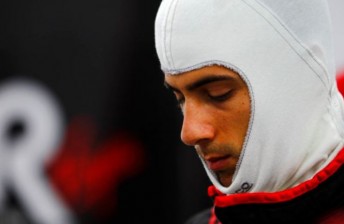 Brazilian Lucas di Grassi has been confirmed as the final Armor All Gold Coast 600 international driver in the field, teaming up with Mother Energy Racing Team’s Jonathon Webb.

The former Virgin Racing F1 driver, who is currently the test pilot for Pirelli, completes the line-up of International drivers for this year’s event.

Di Grassi, 27, says he is thrilled to be part of the unique event.

“It’s a real privilege to be asked to join the high calibre of drivers taking part at this year’s event,” di Grassi said.

“It’s sure to be a special meeting and I can’t wait to take on the Surfers Paradise track.”

Webb was delighted at securing the experienced Brazilian.

“Di Grassi has achieved so much at a young age,” he said.

“He has been involved in F1 racing for the past four years, and brings a professional and polished reputation to our team.

“We have no doubts Lucas will be one of the fastest drivers, and that he will prove to be a real asset for us over the weekend.”

Mother Energy team manager Bruce Jenkins worked with Lucas in 2004 and is pleased the team was able to secure the Brazilian’s services.

“Lucas and I worked together when he was a development driver for Renault, where he proved to be the consummate professional,” Jenkins said.

“As a team we’re confident that he will be a competitive force and help the team to get a great result.”

* Drivers pairings to be confirmed