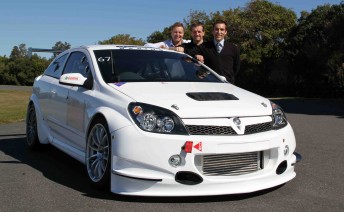 The Astra that Nicholls, Camilleri, Walsh and Kaye will drive at Barcelona in two weeks time

Former British Touring Car driver and Bathurst 1000 competitor James Kaye has been confirmed as a driver in the Australian entry heading to the pair of 24 Hour races at Barcelona and Silverstone.

Team owner Ryan McLeod had prepared the HSV VXR for himself and three others to drive, but the influx of drivers means that McLeod will sit on the sidelines for the first 24 Hour race at Cataluyna, Barcelona.

The driving squad for the Britcar 24 Hour at Silverstone is yet to be confirmed.

Kaye competed in the 1994 Australian Manufacturers’ Championship (nee Super Tourers). He is a British Touring Car stalwart, having driven for both factory and independant teams. He also raced in the 1997 Super Tourer Bathurst 1000, driving a Triple Eight Vauxhall Vectra.

Walsh drives for Miles Racing in the Fujitsu V8 Series and is currently 17th in the points standings.

Despite missing the opportunity to race at the Spanish circuit, McLeod is pleased with his combination of drivers.

“Yeah, it means I miss out, but I’m really happy with the driver line-up,” McLeod told Speedcafe.com.

“I’m trying to help Ash out a bit – like we did with Steve Owen and Lee Holdsworth. I met him when he did the Bathurst 12 Hour with us earlier in the year, and I really rate the guy. As it turned out, he’s already driven on Barcelona and Silverstone, plus he’s driven the Astra, so he is the perfect choice.

“Ash has got the right attitude, he’s a good young bloke and he fits in with our team very well.

“And James Kay came to me with a recommendation from Matt Neal.

“We are the importer for Matt’s Team Dynamik wheels out here for V8 Supercars. Matt will also support our car, so Matt gave us James’ recommendation. It has worked out well for him to be in the team.

“Plus we’ve got Jake and Scott who both drove the car last year and did a great job. It makes for a strong line-up.”

With his drivers locked away, McLeod’s will focus on a team management and strategy role.

“I’d love to drive the car, but I’ll take on a different role now,” he said.

“The key is to get the car home in the highest place possible and do the most amount of laps. Hopefully, my efforts in the pit garage will be more important than me behind the wheel.”

The Barcelona race will be held on September 24-25, followed by the Britcar 24 Hour at Silverstone on October 1-2.