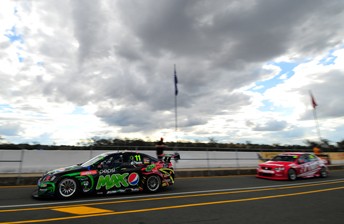 The Pepsi and Stratco Commodores are two of the four-car Kelly Racing entries – but they are anything but the ‘other’ Kelly cars.

David Reynolds, driving the #16 Stratco Commodore, has been one of the standout performers this year, scoring a string a top qualifying results, plus a recent top five finish at Queensland Raceway.

Reynolds will be partnered by Fujitsu Series driver Tim Blanchard – a Bathurst debutant.

The #11 car will be driven by regular Pepsi Max Crew driver and Bathurst legend Greg Murphy, teamed with Danish star Allan Simonsen. While podiums have not been forthcoming, Murphy’s consistency sees him placed 15th in the championship.

The two Kelly Racing cars are filled with youth and experience. Is this the right enduro mix?