Ingall and Supercheap close to 2012 decision

Ingall and Supercheap close to 2012 decision 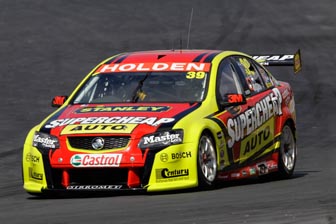 Russell Ingall and Supercheap Auto are edging closer to knowing their future in V8 Supercars, but a decision won’t be made official until after the Bathurst 1000.

Ingall and the automotive aftermarket retailer are on the hunt for a home for 2012 – searching for the right place for Supercheap Auto to sign a multi-year deal, while Ingall yearns for one final, competitive season.

The two-time Bathurst 1000 winner and 2005 V8 champion says that his options have been narrowed down to three teams, with Walkinshaw Racing amongst the teams looking at a slice of the deal.

While Bundaberg and Coulthard’s deals expire this season, WR officials have stated that their first preference is to maintain the Coulthard/Bundaberg combination next year.

If the pair are retained, would WR expand to four cars, if a Racing Entitlements Contract could be sourced?

“We are looking at every possibility in front of us at the moment. To speculate on specifics, we’re a long way from being there at this time.” Ingall says that it is a decision that both he and Supercheap Auto can’t afford to get wrong.

“It’s a pretty big decision, because they want to go to a team where they can settle into for the next few years, not just while I’m there driving.

“They’ve narrowed it down to three teams and they are negotiating with those people now.”

Ingall says that he expects a decision to be made post-Bathurst.

“I think we’ll have a decision after Bathurst, for sure,” he said.

“I think straight after Bathurst we’ll find out what the call is. I don’t think they’ll want to do anything before then, and there’s probably no need to.”

But where ever Ingall lands, will 2012 be his last a full-time V8 Supercars driver?

“Yeah, possibly,” he said in regards to retirement.

“It depends how next year goes. At the moment, I race year-by-year. Next year is locked but beyond that we’ll see how it goes. If I don’t, I’ll go join Skaifey (Mark) in the commentary box!”