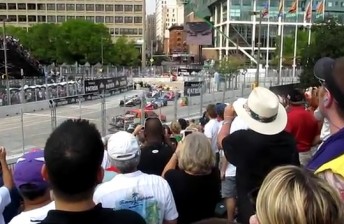 Footage of the horrifying start at Baltimore

Marshalling procedures will come under fire in the wake of two significant errors at the inaugural Baltimore Grand Prix after over the weekend.

In Sunday morning’s warm-up, Tony Kanaan’s airborne car almost hit a estranged marshal on the circuit, while the second incident saw a safety vehicle backwards, towards the field at the start of the race.

CLICK HERE for the story on Kanaan’s wild accident on the Baltimore streets.

If the Kanaan crash wasn’t enough, the IZOD IndyCar Series field got the scare of a lifetime when a safety truck scrambled to avoid the leaders at the start of the race.

The truck was hustling backwards around the track to a Turn 1 parking spot when the green flag waved.

Will Power, eventual winner of the race, was confused with the situation and realised its potential danger.

“Yeah, it was like, what’s going on?” the Austrakian said.

“I couldn’t believe it.

“I was busy trying to pass but I thought, what happened there? That was quite amusing, but it wouldn’t be if someone hit them.”

Will Power won the race from Oriol Servia and Tony Kanaan.

Power, who will drive with Ford Performance Racing’s Mark Winterbottom at this year’s Armor All Gold Coast 600, has slashed the gap to Franchitti by 21 points to just five with three races to go.

See below for video of the start line farce.