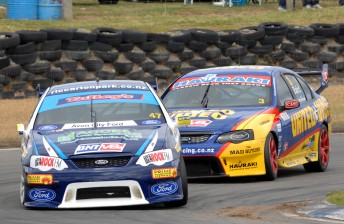 John McIntyre and Craig Baird, pictured here in the NZV8 class, will both step up to the new V8SuperTourer category

New Zealand V8 race fans will receive a double dose of V8 action at five of next year’s V8SuperTourer events.

The V8Challenge Cup is designed to provide cost effective racing for those seeking the opportunity to race in a V8 touring car category as part of the new V8SuperTourer series in 2012. With the aim of using the class to develop new talent, a $50,000 scholarship grant will be awarded during the season.

“The inaugural V8Challenge Cup is designed for New Zealand V8 touring cars that can comply to Schedule TL requirements up to and including the 2010/11 regulations,” Pedersen said.

“We will also consider entries with former V8 touring car-spec cars that may have been re-engined on a performance-equalisation basis.

“Our aim is to provide an affordable V8 touring car feeder series for the premier V8SuperTourer category.

“We have developed some cost effective technical solutions to lessen the cost of running a current New Zealand V8 touring car, such as reducing the engine rev limit and selecting a more cost effective controlled tyre.

“With many V8 touring cars from the past few seasons either for sale or simply not being raced due to budget constants, particularly around the North Island, we know from talking to former competitors they’re simply keen to have an opportunity to race their cars where and when they can afford to.”

The V8Challenge Cup will also enjoy television coverage on TV3’s Gillette Motorsport show with all five rounds screened in a delayed highlights programme.

For many teams, the V8Challenge Cup will provide an opportunity to offer a younger driver the chance to gain some touring car experience.

“With this objective of fostering young driving talent in mind, V8SuperTourers Ltd is also launching a $50,000 scholarship for V8Challenge Cup competitors under the age of 30,” Pedersen said.

“There are many young drivers, perhaps currently racing in a single seater class, who are looking for a chance to prove themselves in touring cars. We’re striving for a cost effective racing format that offers the opportunities for experience and professional development with V8SuperTourers or the Australian V8Supercars as the end goal. That’s why we’re committing funds to developing and offering the V8Challenge Cup scholarship.”

At each round, a scholarship competitor – not necessarily the round winner – will be selected to drive the V8SuperTourer prototype race car. The test run will be televised, adding extra incentive for the scholarship contender to perform well and possibly be selected for an exciting end-of-season two-day test driving the V8ST prototype car coached by Kiwi V8 racing hero Greg Murphy.

“The V8Challenge Cup scholarship provides a perfect opportunity for these up-and-coming drivers to try and secure a drive with one of the V8SuperTourer teams in the 2013 series,” Pedersen said.

The 2012 V8Challenge Cup covers the five North Island V8SuperTourer events, including all three rounds at the Hampton Downs Motorsport Park midway between Auckland and Hamilton, and one round each at Manfeild in Fielding and the Taupo Motorsport Park in Taupo.

Pedersen is confident of of seeing at least 16 cars compete in the first round of the new series.

The opening round of the V8SuperTourers class, and the V8Challenge Cup will be held in February at Hampton Downs.