Ahead of next weekend’s L&H 500 at Phillip Island, all but two V8 teams are going through their paces leading into the first two-driver race of the year.

The only V8 Supercars Championship teams not testing today are Garry Rogers Motorsport and Lucas Dumbrell Motorsport. GRM will test next Monday, debuting a new #34 Commodore for Michael Caruso, while LDM has elected not to test in the lead-up to the enduros.

Ford Performance Racing’s Mark Winterbottom is getting his first laps in his new car – FPR’s second new Falcon to race in as many rounds.

The new Orrcon Steel FPR Falcon is the same specification to the car Will Davison debuted at Queensland Raceway last event. 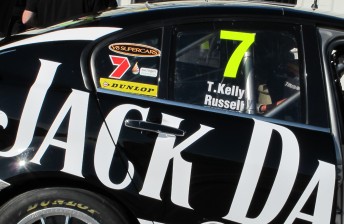 Winterbottom and team-mate Steve Richards are getting up to speed in the car today ahead of the new chassis’ race debut at Phillip Island.

“Straight out of the box, there’s been no problem, so we’re just doing a 20 lap run now to start the day.”

Today, teams will be sharing seat time between their regular drivers and their co-drivers. Only the international co-drivers, like Allan Simonsen (Pepsi Max Crew), David Brabham (IRWIN Racing) and Matt Halliday (Jim Beam Racing) are not testing in the lead up to the endurance races.

Non-endurance drivers getting laps in V8 Supercars today include David Sieders and Jake Camilleri who are testing Paul Morris Motorsport’s VIP Petfoods Commodore entry. Sieders scored the test thanks to his prize from V8 Utes, while Camilleri has been awarded the drive through his connections with Castrol and Ryan McLeod’s Racer Industries operation.