Will Power wins in Baltimore

Will Power wins in Baltimore 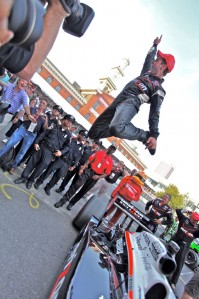 Will Power scored his sixth win of the 2011 IndyCar Series

Will Power has won the inaugural Baltimore Grand Prix to score his sixth win of the season and close the gap in the IZOD IndyCar Series to Dario Franchitti to just five points.

Power started from the pole, led the most laps and although he appeared to cruise to victory, the Toowoomba racer said it was tougher than it appeared.

“I gave it absolutely everything. I’m exhausted. I reckon that’s probably one of my best race wins ever.”

It was what transpired behind the Verizon Team Penske driver, who chopped 50 points off series championship Franchitti’s lead over the past five races and heads to the Twin Ring Motegi road course on 17 September with his confidence on a high.

Oriol Servia came from 16th on the grid to finish runner-up ahead of Tony Kanaan – Franchitti was fourth with Chip Ganassi team-mate Scott Dixon in fifth.

Ryan Hunter-Reay recovered from contact with Australia’s Ryan Briscoe to finish eighth, while the Sydney driver was placed 14th.

Briscoe was penalised for his role in the incident, but remarkably only Giorgio Pantano and James Jakes were forced out with damage. Nevertheless, the traffic jam prompted a dramatic reshuffle of the order between positions six and 28.

“Ryan was blocking me and then he changed lanes,” Briscoe said.

“I was coming in hot because he was blocking and then I had nowhere to go. It wouldn’t have happened if he wasn’t blocking me.

“It’s a tough penalty, it ruined my race.”

See below for the race results