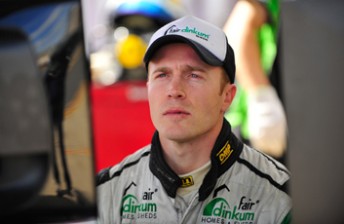 Karl Reindler has suffered his second significant injury this year.

Having fully recovered from his third degree burns that he suffered in the infamous start-line crash at Barbagallo Raceway, the #21 Fair Dinkum Sheds Racing driver is now dealing with a stress fracture to his left ankle.

The West Australian suffered the injury during Perth’s City to Surf event, where he finished 87th from the 15,000 entrants.

Despite completing the 12km run in a competitive 46 minutes, Reindler says that less-than-ideal preparation has caused the complaint.

“I committed to doing the City to Surf run in Perth, and I probably wasn’t as prepared as I should have been,” Reindler told Speedcafe.com.

“I thought I had a couple of weeks up my sleeve, only to find out that I only had six days!

“I got back from Queensalnd Raceway, got two runs in and dug so deep in the race.

“I had a great result, finishing 87th, and I was really happy with the time but, unfortunately, I’ve got a stress fracture in my ankle.”

He says that the injury is causing him no grief behind the wheel and is positive heading towards next weekend’s L&H 500 Phillip Island.

“In the car, it’s not restrictive in anyway,” he said.

“It’s more when I walk around. I definitely can’t run. When I walk, I know it’s there. I’m just pumping myself full of anti-inflamatories and getting on with it.”

His team-mate David Wall is still recovering from a broken leg suffered during a work place incident in June.

“It was funny, we were both here half an hour before the test, sitting on our bums strapping up our ankles!” he said.

“It’s probably not the best start to a test day, but for me, I have no restriction. We’re just practicing driver changes – and it might be an issue today, but we have two weeks up our sleeve before Phillip Island. We should be doing 14 second driver changes in no time!”

In other BJR news, look for the team to confirm Shane Price as Jason Bargwanna’s team-mate in the #14 Jana Living Racing Commodore VE.

As reported previously on Speedcafe.com, cancer stricken Kiwi star Jason Richards will soon confirm that he will not compete at Phillip Island as he continues to fight his illness.

The news will mean that Andrew Jones will partner Jason Bright in the #8 Team BOC Commodore.