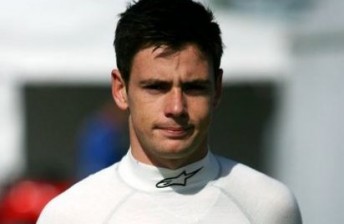 Australian Scott Pye has claimed his first victory in the British Formula 3 International Series, taking a round win in Rockingham.

After posting only an eighth place finish in the weekend’s opening race, the 21-year-old started Round 23 of the championship from pole position and proceeded to hold onto the lead until the chequered flag, with Felipe Nasr finishing over 10.2s adrift in second place.

Using the wet weather to his advantage, Pye had crucially managed to keep a determined Kevin Magnussen at bay off the start.

“It was all about the start,” said Pye.

“With the spray and the rain it was going to be difficult to overtake.

“Kevin and I made very similar starts but I led into Turn 1 and commanded the race from there. After that it was just a case of keeping my head down.

“I knew that we were quick in the wet and though there was a lot of pressure with Kevin and Felipe behind me I kept my head down and drove away.”

In Round 22, race leader Felipe Nasr had been forced to serve a drive-through penalty for not respecting the track limits – handing the lead and subsequent win to pole-sitter Pietro Fantin.

The last race of the weekend at Rockingham saw Magnussen finally turn some of his speed into a win, fighting off second placed Fantin throughout the race and holding his position through two safety car periods.

Third place for Nasr however was enough for the Brazilian to be crowned champion with six races still remaining.

“It’s great – I still don’t quite get what it means,” said Nasr.

“This feels like the end of a normal race for me, and yet I feel very happy.

“Grabbing the title early on here is just amazing. It’s been a lot of work, a lot of dedication from the team, and it’s very special.”