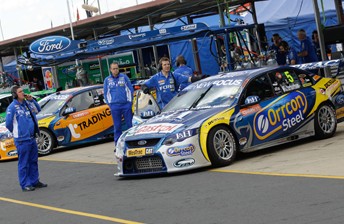 Mark Winterbottom and Will Davison at Queensland Raceway

It is almost impossible to discount the factory Ford squad at Phillip Island and Bathurst, but it has been a difficult year from a team that only had eyes for the title.

With Mark Winterbottom (Orrcon Steel) currently seventh and team-mate Will Davison (Trading Post) in eighth, it could be worse, but for what they expect, it should be better.

The good news is that both Phillip Island and Bathurst will be held on the hard tyres – rubber the team is a proven quantity on. Also, the co-drivers (Steve Richards and Luke Youlden) are among the best in the field

Can FPR make the 2011 endurance races represent a turning point?