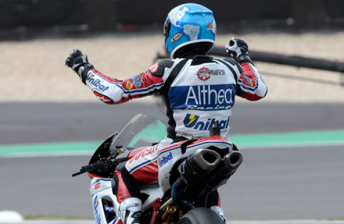 Carlos Checa celebrates his Race 1 win at the Nurburgring

Championship front-runner Carlos Checa has increased his championship lead after a taking a race victory at the Nurburgring round of the World Superbike Championship.

The Ducati rider won Race 1, finished eighth in the second race and extended his title lead to  74 points.

Also on the winner’s dais was surprise packet Tom Sykes, who clocking his first race win in Race 2.

Checa cruised through the first race of the German round, posting a methodical win after holding off Noriyuki Haga in the early stages before leaving the rest of the field to battle for second place.

A wet and wild second race saw Kawasaki’s Sykes take the race win after initial race leader Haga fell after leading for the majority of the shortened 13-lap race.

It was a multifaceted win for Sykes and his team, battling the imposing conditions the German race was his maiden race victory and team Kawasaki’s first race win since 2006 in the series.

Ducati team-mates Sylvain Guintoli and Jakub Smrz were in second and third place when Race 2 was stopped due to the elements, while championship leader Checa finished in eighth.