Castrol EDGE has announced it will be the naming rights partner to the Super Special Stage at this weekend’s Rally Australia on the Coffs Coast.

This weekend’s Rally Australia is critical for Hirvonen if he is going to topple World Champion and current Championship leader, Sebastian Loeb – who’s embroiled in a bitter inter-team feud with Sebastian Ogier.

Hirvonen sits in third place on the standings having taken out the opening rally of the year and he’s currently 36 points behind the all conquering Loeb.
The Castrol EDGE Super Special Stage will take place in the marina area of Coffs Harbour. 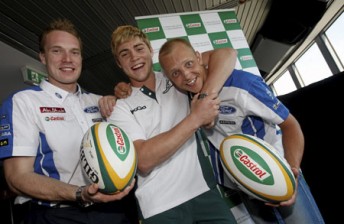 O'Connor, Latvala and Hirvonen hamming it up at the official Rally Australia launch

Meantime, O’Connor jets out with the Wallabies today for the Rugby World Cup in New Zealand. Australia’s first assignment will come against Italy next weekend. Australia has arguably one of the toughest pools in the tournament – up against the Italians, Ireland, Russia and the USA.

Tickets for the Castrol EDGE Super Special Stage can be purchased through www.rallyaustralia.com.