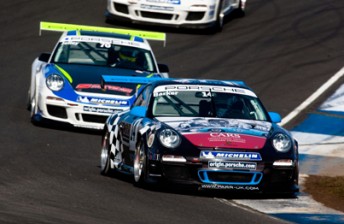 Ben Barker has scored his second podium finish in as many Porsche Carrera Cup Great Britain events at Knockhill.

Barker, currently sixth in the Porsche City Index Carrera Cup Australia, qualified in third position for both of the weekend’s two races.

The Briton started the opening race well, however contact with rival James Sutton soon after the start forced Barker to retire due to damage, with Michael Meadows winning the race ahead of Euan Hankey and Sutton.

In the second race, Barker maintained his third position from early in the race to claim his second podium position in as many Carrera Cup Great Britain round; having scored third in the Porsche championship’s Snetterton round last month.

Hankey dominated the second race, claiming a lights-to-flag victory ahead of Meadows, Barker and Sutton.

Barker will now return to Australia for the fourth round of the Porsche City Index Carrera Cup Australia at the L&H 500 at Phillip Island.