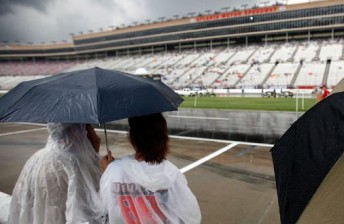 NASCAR Sprint Cup teams are in for a busy week following the postponement of Atlanta Motor Speedway’s AdvoCare 400 until Tuesday.

Rain prevented teams from taking to the circuit during the original Sunday timeslot, and with tornados and strong winds being added to forecasts of further rain on Monday, NASCAR president Mike Helton announced the revised 11am (US ET) Tuesday start time (1am Wednesday Australian EST).

“Starting sometime later (Sunday night), it’s about 100 percent chance in this area there will more than likely be 3, 4, 5 inches of rain, high wind and all the things that create dangerous situations with weather,” said Helton at the circuit.

“We’ll have respect for that and reschedule this race to start at 11 Tuesday morning.”

With the Wonderful Pistachios 400 at Richmond set to conclude the regular season next Saturday night, Helton downplayed the headache the tight scheduling is likely to give teams.

“Hopefully the weather will be ok Tuesday and we’ll just be a couple of days behind, but we’ll catch up pretty quick – I hope.”

See below for Atlanta’s starting line-up