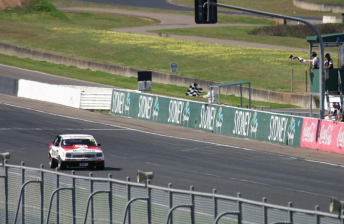 The Father’s Day event saw a number of racing categories, demonstrations, hot laps, static displays and appearances from some of Australia’s most well-known racing drivers.

These legends entertained the crowd, with some of them competing, while others were simply there to sign autographs, talk to spectators and reminisce with their old racing buddies.

There were a number of racing categories competing, but none copped more exposure than Group C. The cars from yesteryear, most of which display the looks and liveries from years gone by, are generally a pleasure to watch, but today, cancer stricken V8 Supercar driver Jason Richards was the star attraction.

Richards, driving the Torana A9X, scored a win in the feature race, bringing the huge crowd to its feet.

While Richards’s achievements were a pleasure to watch, the lead category was the popular Touring Car Masters, presented by Autobarn.

The 30 car field looked like it was going to be a John Bowe-only zone after the two-time Bathurst 1000 winner took pole and won Race 1 and 2.

In the third race, Bowe, driving his #18 Mustang, fell down the order, copped a penalty and was ruled out of the race after just eight laps.

This opened the door for Chevrolet Camaro of Andrew Miedecke to take the round win. The former touring car stalwart qualified third and strung together three consistent races, finishing second, second and first.

Second overall went to Jim Richards in his Ford falcon Sprint. ‘Gentleman Jim’ finished third, fourth and third, enough to collect the runners up spot for the round.