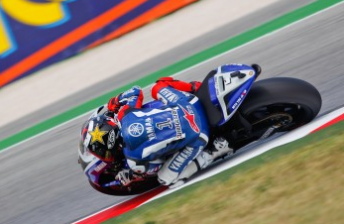 Jorge Lorenzo on his way to victory at Misano

Lorenzo, riding his factory Yamaha, snatched the lead off Stoner at the start and drove into the distance, securing the win and ending Stoner’s three-race winning streak.

The win, Lorenzo’s third for the year, has dropped Stoner’s points lead from 44 to 35 points with five rounds to go.