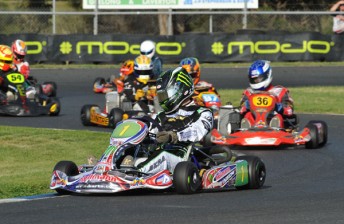 David Sera on his way to winning the 12th National Championship of his career today. Pic: AF Images/Budd

While Daniel Rochford outpaced the Victorian during yesterday’s heat races, the Monster Energy-backed Arrow karts driver turned up the heat when the title was on the line this afternoon.

Sera’s victory was a dominant one with the 23 year-old leading the entire 30-lap final to claim the 12th National crown of his illustrious career. Courtesy of his win Sera moved to equal second on the all time winners list in Australian karting with Peter Ward.

“I’m over the moon to have won five straight, and now also 12 all up in my career,” said an elated Sera.

“It wasn’t easy out there in the final, I think I was hearing things like someone was right behind me. For the first 15 laps I just put my head down and didn’t look behind once.

“The first time I looked behind I saw that I had about a two second lead, from there I was able to drive a little bit more conservative to make sure I maintained that gap until the end.”

Behind Sera it was an intense battle for the minor placings with Rochford eventually getting the better of World Final Runner-up New Zealander Josh Hart.

Fujitsu Cool Program driver Joseph Mawson has been the dominant driver all throughout 2011 in the Junior Max category. This weekend was no different with the 15 year-old claiming the third national championship of his flourishing career aboard an Shayne Piper/Kart 1-prepared Arrow kart.

“I wanted to win this one so bad. I was fortunate to have some luck on my side though as I had a throttle issue and when the race was stopped due to an incident I was able to get it fixed before going on to take the win,” said Mawson.

In the Rotax Heavy category, it was Melbourne driver Troy Woolston who dominated the main event to claim the second national championship of his career, his first victory came in 2002.

Woolston showed superior speed aboard his CC Racing-prepared Intrepid kart to cross the line 3.8 seconds clear of Matthew Wall, who started 11th in the final.