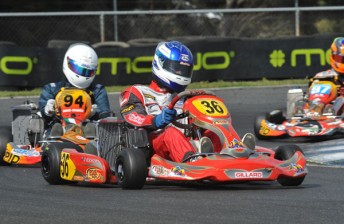 With the championships using a split heat race format, the pair went head to head only once today, with Rochford coming out on top aboard his Gillard kart ahead of Sera.

“It’s definitely all gone to plan today, but tomorrow is a new day and with such high quality of competition out there like Dave and Josh (Hart) it’s going to be a tough day,” said Rochford, who is campaigning aboard a Gillard kart this weekend.

“Dave has dominated the Rotax Nationals over the past few years, so I think he’ll be tough to beat tomorrow – as will Josh, who was my team-mate when we both raced in Europe during 2008.

“I’ve had a little bit of success here at Geelong during my junior days – hopefully the track can be kind to me again tomorrow.”

Sera, who has won five of the past six titles in the Rotax Light division, will start from position two alongside Rochford in tomorrow morning’s 20-lap pre-final.

After finishing runner-up in his opening two heat races, New Zealand driver Joshua Hart broke through for victory in his final heat race to secure a second row starting spot for the pre-final.

Two wins a piece for pre-race favourite Joseph Mawson and fellow Sydneysider Joseph Burton-Harris has ensured they will share the front row for tomorrow’s pre-final of Junior Max.